This post could have been entitled, “A Departure From The Road,” or “Before The Road There Were Trains,” but the former seems cliché and the latter’s too wordy.

The quote from Ray Navis’ article in the Santa Ynez Valley Journal seems a most fitting title for this post, The further south we headed, the more surfers appeared.

Although, that is not what this post is about: Surfing. (I just really like that sentence as a stand-alone offer. As if surfing, or surfers rather, were a species to be located within a certain latitude. A sighting likened to the excitement one experiences to view penguins in Chile or giraffes in Kenya.)

Ray took the train, Amtrak’s Pacific Surfliner, south from SLO through seldom visited California coastal locations, such as the town of Guadalupe, a stop at the Lompoc-Surf station, and traveled by rail through the last remaining tracts of California ranchos in northwestern Santa Barbara County.

“This is what California looked like before it was “discovered”,” describes Ray for us readers. “There are some roads back into this area but very few, if any, cars on them.” Mmm, sounds idyllic.

I suffer from the delusion that if I just visualize the history of California’s coast, someday time reverses and I find myself to be the sole whitey living amongst the natives, a few hundred years even before Portolá’s overland expedition. Perhaps if I believe intensely enough, I can even get back to before Drake, before Cabrillo, and confirm for everyone that the Japanese and Chinese indeed populated California’s coast via a land bridge and ship travel. I will eat fusang with Hui Shen.

Taking the train along the coast is lovely, but I wonder what it’d be like to backpack that route, à la Sal Paradise camping on the beach, cooking franks in On The Road. What’s the risk in getting caught? What’s the penalty? How great would it be for there to be neither and instead, be able to travel quietly through this coastscape, before it too is “discovered.” 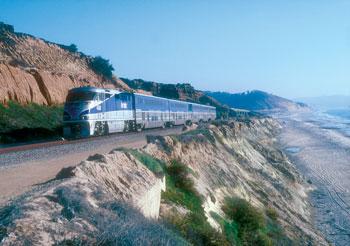