Pair these two California icons and try to find a relationship:  Does John Steinbeck appear along Highway 1?  Does Highway 1 appear in John Steinbeck’s novels?

No Coast Road for Steinbeck’s characters to travel upon. Zero mentions in over 42 years of writing and 25 literary efforts. Although John Steinbeck wrote from his teens in the late nineteen-teens until his death in 1968, the man fails to include the coastal route in any of his characters’ travels. In Tortilla Flat (his best, IMHO), all action takes place in Monterey upon the hill or down at the beach. Most scenes in East of Eden occur on the ranch in the valley or as narrative memory in Adam’s mind. The Red Pony gives us only a dirt lane to school from the farmhouse.

The Coast Road was present during John Steinbeck’s time. John used it to travel to the Post’s for summer work on the ranch in Big Sur. John was around when a Monterey doctor, John L. D. Roberts, began persuading the locals that it was time for the wagon road down the coast to be formally built and paved.  Road building began in 1929 and by the time John’s Of Mice and Men was published in 1937, the highway was complete with an opening ceremony on July 3, 1937.  How could John not include the Coast Road as a setting in any of his short stories or books?

Yet, John Steinbeck does describe the coast in a slim volume of a dozen short stories, published in 1938, The Long Valley.   In “Flight,” the lead character, nineteen year old Pepé Torres, evades the law by climbing the Big Sur backcountry.  “Flight” begins:  “About fifteen miles below Monterey, on the wild coast, the Torres family had their farm, a few sloping acres above a cliff that dropped to the brown reefs and to the hissing white waters of the ocean.  Behind the farm the stone mountains stood up against the sky.”

And in “Leader of the People,” an interesting philosophical mention, a Manifest Destiny, of the California coast, “He led a wagon train clear across the plains to the coast, and when it was finished, his life was done.  It was a big thing to do, but it didn’t last long enough.  Look! It’s as though he was born to do that, and after he finished it, there wasn’t anything more for him to do but think about it and talk about it.  If there’d been any farther west to go, he’d have gone.  He’s told me so himself.  But at last there was the ocean.  He lives right by the ocean where he had to stop.”

A blurb from Pat Conroy on the dustjacket reads something that I’d also thought when first hearing about the writer Thomas Steinbeck, son of John:  “If John Steinbeck were my father, I would not have the courage to write a laundry list or letter to the editor.”

Indeed.  Can you imagine?

Published in 2002, Thomas’ stories in Down To A Soundless Sea write of not legend but true events.

In “Blind Luck,” it’s not the story of how Dr. John Roberts got Highway 1 built, but about an event that led up to his plea for needing it:  the shipwreck of the S.S. Los Angeles.  And really, “Blind Luck” isn’t about Doc at all, he’s just a minimal figure late in the story.  The story is about Chapel Lodge, a coal shoveler and a survivor of the wreck, who recovers in the lighthouse at Pt. Sur.  One bitty inclusion of the coast road in “Blind Luck” reads, “Chapel determined to walk down the steep road from the lighthouse and across the broad isthmus that led to the coast road.”

In “An Unbecoming Grace,”  Thomas describes the man who saw the Coast Road built through central coast California, “Doc Roberts was a respected medical man and good friend to almost everybody on the Monterey coast.  In one sense it might even have been said that he was indispensable, being the only physician willing to ride the long and dangerous coastal mountain circuit to care for his patients.  His perseverance and dedication were well regarded by all who knew him, and even crazy old man Clarke, who wasn’t the least bit crazy, said Doc Roberts had the sharpest aptitude for the truth of any man he had ever met.”

“Having assembled the requisite medical supplies, Doc hitched up Daisy and made his way south.  Since Daisy knew the way down the old coast road without meddlesome interference, Doc secured occasional opportunities to read his medical journals, eat sandwiches, or drink coffee without reference to his course.  The doctor sometimes stopped to greet a friend or patient on the road, but more often than not, the route was barren of incidental traffic.  The occasional tinker or peddler sometimes camped by the way, and these dusty gentlemen of the road always received a civil greeting and a few moments’ conversation from the doctor.  He had discovered that commercial travelers often held keys to all manner of useful intelligence.”

“Doc wished for a wider track along the coast.  A trip that should normally have taken twenty hours, on saddleback, would now consume the better part of three days, possibly more.”

Beyond the Coast Road, Thomas includes the subtle environmental and cultural artifacts of life on the coast.

Casa Grande, the big round house of the Ohlones that Portolá’s expedition came across just north of Waddell on their northern expedition in 1769 shows up in “The Dark Watcher.” “Miss Castro approached, almost as shy as the professor himself.  ‘My parents said they would sponsor me to accompany one of two expeditions this summer, and I still haven’t made up my mind which would be the most rewarding.  Dr. Rice, at Stanford, is leading a small group north to the Salmon Island excavations, and our Dr. Holt has been invited to muster a party of students to work the diggings at Casa Grande.'”  Miss Castro is advised by Professor Gill to take the opportunity at Casa Grande.*

And a slice of life represented by a description of the mail stage driver, “Being the mail-stage driver made Mr. Grimes the first herald of all local tidings.  His catalog of idle gossip seemed endless.  Grimes loaded the professor’s bag in the boot of the stage with the mail, smoked wild boar hams for Frida Sharpe up at the Bixby Inn, and a roll of uncured deer hides for the little tannery in Monterey.”

In “Blighted Cargo,” a lovely description of a meteorological phenomenon we’ve discussed in this blog, Advection Fog:  “It was just as he had decided to sweep back for shore that O’Brian noticed a dense, swift-moving fog bank for shore overtaking his flanks from the northwest all the way to the lee shore.  It came upon him at first like a wall against the horizon and stars.  Then it consumed the constellation of Leo and boiled on to embrace every visual reference.  O’Brian felt iced fingers of panic climb his spine and make his scalp twitch.  Beads of perspiration erupted from every pore and chilled instantly to magnify the effect.

And in “Sing Fat and the Imperial Duchess of Woo, “Sing Fat licked his lips.  The moist air, even at this distance from the bay, tasted of sea salt.”

“Like Point Alones, Pescadero Village, which clung precariously to the rocky shores of Stillwater Cove, could be located by bouquet alone.  Even with the rising wind, the odors of fleshed and dried sea life stuck to the village like a paste.  Sing Fat was sure that not even the coming rains would scour the stench from the air.” 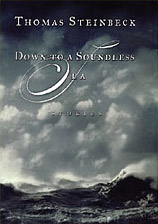 The writing of our younger Steinbeck, Thomas, is fantastic, complete, and wonderful, so there is absolutely no need to worry about laundry lists or letters to the editor.

The storytelling is absorbing, and for this California coast fanatic, so very satisfying to be able to read about characters and events who and which I’ve learned about through various memoirs and historical accounts.  Thomas brings to life these peoples and places so that I may do what I like to do best, relive the legends, myths and true events of a simpler and less-populated time on the California coast.

*Note:  This Casa Grande may be the Casa Grande in Arizona, not just north of Año Nuevo.  Shoot.  Just was made aware of this.  Will research to confirm.