A friend lent me his copy of A Separate Place, with text by Charles Jones and black-and-white photographs by Susan Friedman.  Printed in 1974 by the Sierra Club with no reprints, A Separate Place describes California’s coastal corridor of San Gregorio to Pescadero and its inland nooks of La Honda and Loma Mar.

This is coastal southern San Mateo County, also known as, The South Coast.

Wallace Stegner writes the blurb on the back of the dust jacket, “A Separate Place is a book that will speak most eloquently to those who know La Honda and the redwood pockets on the Pacific side of the Santa Cruz Mountains.  But it will speak to almost anyone who remembers real places and who resents the plastic nowheres we too often make them into.  Everyone should know a piece of earth as Mr. Jones knows his – historically, scenically, meteorologically, humanly.  Everybody should love one place as much as he loves his.”

Charles writes, “I wondered then, as I still do, how such a place could exist just 20 miles from the crowded San Francisco Peninsula and only 50 miles from The City itself.

“There is a danger in this book, then.  When you love, you want to tell all without telling everything.  And telling all, even if not everything, exposes a lot, runs you the danger of a lost love.  The danger can come from too many people using up what is here now, destroying solitude, land, the trees, all that makes this a separate place.  We almost lost it to a Corps of Engineers’ dam, and the threat is not over yet.  Maybe next time, if more people know how and why this place is separate, we’ll do better, and our canyons to the sea will survive.”

In the next passage, Charles writes of Highway 84:

“The coast redwoods, logged and logged again, are close and tassled at the top like wheat.  Their lower trunks are bare in the darkness; underbrush in the acid soil is sparse.  When there is light, it often has the same feel as in thin fog:  there seems to be no source.

“The canyon is deep and narrow and thicketed somewhere below the banks of trees.  Like a downhill sea, the road moves in slow changes up and down and curve to curve, gently and in long arcs of time and space.  It is not a twisted, switchbacked string like the roadbed on the eastern slope of the Santa Cruz Range, coming up from Woodside.

“Down-canyon a way, the ridges open out into bare slopes, with redwoods only on the lower levels now; the hills seem to soften and lighten, the canyon to darken.  The road twists into the dark right along La Honda Creek.  Most of the year, freshets run across the road in a few places, but only in small and simple sheets.  The water rills from the banks, spreads over the road, and trickles to the creek.

“West of “the Boots,” as many call it, one of the fine roads of the Coastside heads for the ocean.  Redwoods line both sides of the road for awhile.  Then you’re around a turn and the trees have thinned and almost stopped.  here the canyon opens into a small rolling valley with some flat rich soil, some brush and grazing land, a few houses.  Once the home of dairy herds and farms, the valley land is now hard for each owner to keep.  Not enough water and too many taxes: not enough farmers and too many developers.” 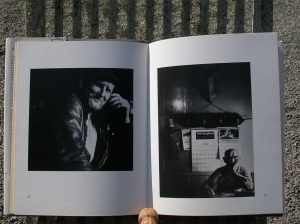 Now Charles arrives at the coast and describes Stage Road and Highway 1:

“There are two roads between San Gregorio and Pescadero.”

Highway 1:  “The usual way lies along the ocean.  It leaps and dives over cliffs and past beaches, from the fossils of San Gregorio to the pebbles of Pebble Beach.”

Stage Road:  “This road seems to be the impossible:  a natural road, a road with splendor and elegance, a road with dreams, even.  Stage Road connects San Gregorio and Pescadero, and ekes out a little more life on the ends of both towns.  This twisting road was once the way for the stage to pull up and brake down under the gyre of hawks.”

“These beaches are ocean people’s shores and don’t much belong to beach people.  Ocean people go to the sea because they can’t help it.”

Published two years after the California Coastal Act was passed in 1972, Charles recommends in A Separate Place:

“We think that 1972’s Proposition 20, which established the Commission, will now help save the beaches.  There ought to be something certain about carrying out the intent of the voters and the law.  There is not.  When you win a trophy, you can display it or put it away and you’ve still won.  When you win a proposition on a ballot you’ve just begun, because it will be subverted as often as pressure says it can.  Thus it may be that our beaches are even less safe than they were before.”

4 thoughts on “A Separate Place”