A roadwork project with its own logo, and flyer!

Pitkins Curve is The Highway 1 spot for road closure during wet winters, yet even during the dry season, the hillside is an intimidating scree of graywacke; hence the name:  Rain Rocks. 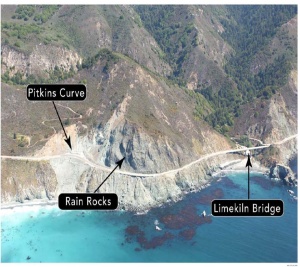 Most times that I’ve driven through this pass there are cones out to slow cars’ speed and men shoveling shards of sedimentary rock off the roadway.

Other times, the men are gone, the stop light is not in use, but the hillscape appears as if bombs went off and I’ve come along just after all the rock broke loose.

Big Sur hosts several points where the hill above the roadcut weakens, falls and closes the Coast Road providing a hemispheric existence for residents. Pitkins Curve – Rain Rocks easily takes Top Honors of Continuous Nuisance.  Asphalt constantly patched and repaved. Always littered with rocks onto the roadbed and stacked at the shoulder.

The Coast Road bed cuts through a 100 million year old turbidite flow.  Most of that 100 million years was the action of eroded ancient mountain tops, turned to fine sand that flowed down the mountainsides, settling into pre-historic seas.  Mudstone, sandstone and conglomerate.  All sizes sorted great and small in waxing and waning flow, then bound together by some gooey mud, and compacted tightly for a time equal to or greater than 30 million years, to become roadbed for California State Route 1.

We come along, in the past 80 years since the ribbon cutting, and slop asphalt over the graded tops of this graywacke fully expecting the 50º slope not to move, not be eroded by rainstorms, nor weathered by wind.

CalTrans states in both the EIR and their Traffic Management Plan, “In years of catastrophic failure, the roadway has been closed for up to one month. Annual costs for emergency roadwork and repairs at this location average approximately $1.0 million but have been as high as $3.4 million in years of heavy storm damage.” The Pitkins Curve/Rain Rocks Project consists of a 240-foot rockshed and 525-foot bridge. “Construction of the bridge and the rock shed is estimated to take 790 working days or approximately 4 years. Construction is scheduled to begin in November of 2009.  All nighttime road closures and extended daytime delays will require one-week advanced public notification.”  Proposed construction cost:  $28.2 to 34.7 million.

CalTrans and the bridge and tunnel contractor(s) might want to use Twitter as PCH Partners are doing with the Santa Monica Bluffs project.  Many times locals and tourists won’t see the closure or delay signage until they are on the road.  Perhaps having an internet signage venue, such as Twitter, could allow travelers to better plan ahead?