Mystic Arts World at 670 South Coast Highway in Laguna Beach is described in a 1973 Los Angeles Times article, “The store dealt in the accoutrements of the burgeoning psychedelic culture – love beads, clothing, and health foods.”

Mystic Arts World is the store front owned and operated in the late Sixties by a band of drug pushers who once lived in the Canyon.  Nicholas Schou’s Orange Sunshine tells the tale of Mystic Arts World and its notorious assortment of inlander badasses who named their group The Brotherhood of Eternal Love. 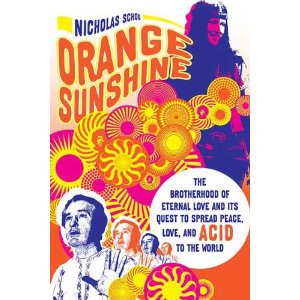 30 miles northeast of Laguna Beach is Anaheim, the “working-class city” where the Brotherhood of Eternal Love founder, John Griggs, and his friends “grew up in the shadow of Disneyland.”

“Most of them were former heroin addicts and boozers, petty crooks and street fighters who’d driffted in and out of juvenile hall, jail, and reform school.”

An Anaheim High School alumni who attended school with John Griggs told me, “Johnny Griggs was the meanest boy in school!  He was always getting in fights and one time he poked a boy’s eyes out with his fingers!”

“Griggs and his friends moved to Laguna Beach and helped usher in a flowering hippie scene that established the city as a Southern California version of Haight-Ashbury, luring countless flower children to overrun the resort town and fill its beaches, coves, and canyons with the scent of marijuana and hashish and the wild sounds of the latest psychedelic rock albums.”

The Brotherhood attracted a circle of runaways and kids from broken families.  Fourteen year old, Thurston Junior High School student, “Thumper,” met the Brotherhood when his dysfunctional parents became too negative to be around.  “I went in search of my sister and stopped by Mystic Arts right across from Taco Bell on Pacific Coast Highway.”  Thumper was told that he’d find his sister, “Sunshine,” at a “group grope” in the canyon and that she was crashing at Johnny Gale’s house.

“Thumper would recall decades later that his brief stay was the adventure of his life.”  In addition to losing his virginity at the age of 14 to a 23 year old and dealing drugs for the Brotherhood, Thumper met Timothy Leary who was hanging out with the Brotherhood at Mystic Arts World.  “After a month of following his sister from one house to another,” Thumper moved uphill.  “The caves, high in the hills above Laguna, near a part of town called Top of the World, thanks to its panoramic ocean view, were known among locals as the Living Caves.”

“We wound up living in a cave for a while,” Thumper says.  “I did homework in a cave by lamp.  Is that a groovy thing or what?”

You will notice more elements of this photo’s story after reading Nicholas Schou’s Orange Sunshine.

Orange Sunshine includes the story of Neil Purcell.  Purcell, a patrol officer from Newport Beach “where he broke up fights between surfers and bodyboarders at crowded surf breaks like the Wedge,” worked undercover for the Laguna Beach Police Department.  “He was stunned by the amount of drug activity he witnessed — hippies wandering up and down Pacific Coast Highway or Laguna Canyon Road in broad daylight smoking weed with no fear of arrest, as if they had no idea what they were doing was illegal.”

John Griggs “had his own legally-registered church and used its tax-exempt status to establish Mystic Arts World.” It’s not a plot spoiler to tell you that Mystic Arts World’s demise was by fire.  “We burned out those hippies on Pacific Coast Highway,” boasted a John Birch member whose “own daughter became an acid-dropping hippie.”

It would be a plot spoiler to tell you the fate of either John Griggs or Neil Purcell.  One died by doing a face plant into a campfire “at a ranch hideaway nestled in a grassy bowl three hundred feet beneath a rock-strewn ridge along the Pacific Crest Trail between Hemet and Palm Springs,” the other made quite a career for himself in Laguna Beach and is now happily and healthily retired with his lovely wife.