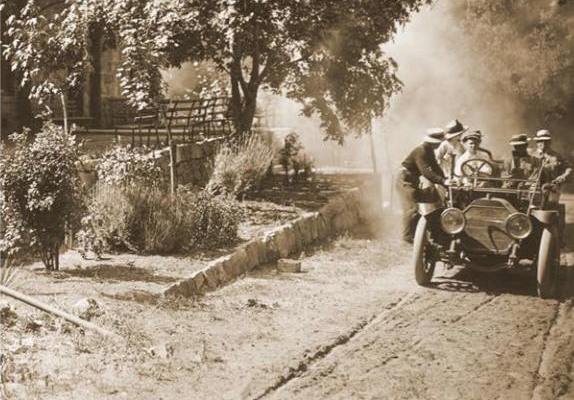 Marilyn McDonald amassed a collection of historical clippings, photos, and stories of the history of Tassajara that grew into a scrapbook for guests to peruse at the counter of the Tassajara office. David Chadwick wanted to add a history page of Tassajara to his website and knowing of Marilyn’s research over the years of the hot springs, he reached out to fellows and family members who also considered making Marilyn’s scrapbook more widely available. A Brief History of Tassajara is the book now published for any of us to enjoy.

A Brief History of Tassajara opens with a nod to the Esselen who originally lived in this region and then moves into the second half of the 1800s when J.E. Rust became the first white settler, followed by J.B. Borden, then William Hart who homesteaded the 160 acres for 9 years and hosted a camp for visitors to take the hot springs as a cure “for general debility, asthma, cutaneous diseases, rheumatism, and kindred complaints, their waters are said to work miraculous cures.” (Salinas City Index, March 1877).

Charles and Mary Quilty were the next owners of Tassajara Hot Springs from 1885 to 1897 when Mary died. The following year, Charles met and married Helen Ford, who wanted to run the hot springs and together they built the Tassajara Hotel and advertised the resort. Charles died in 1914 and Helen Quilty continued running the resort until 1945. The resort changed owners to the Myers, then the Sappoks, and then to the Hudsons, and finally to the Becks and Roscoes. In 1966, after the rigors of resort management exhausted each set of successive owners, the San Francisco Zen Center bought the property.

Tassajara Road has always presented a challenge to maintain since it was built by Charles Quilty in 1888. A quote attributed to Ira Bailey states, “That’s what ruined Tassajara for the old-timers, the advent of the automobile. When they rode in on the horse stage, they had to stay two or three weeks in order to recuperate for the ride out. Automobiles changed that.” An advertisement from the early 1960s pledged, “Our food, our waters, our climate and our guests are extraordinary. So is our road. (Actually one man called it an abomination, but he keeps coming back.)” The late great Charles McCabe wrote for the San Francisco Chronicle, “Tassajara, a true cul-de-sac, is at the end of what must be the worst passable auto road in California or maybe in the world. The real point of the thing is the mineral waters, in which you simply stand erect and become ten feet tall. The waters – plunges, vapor baths, and chilling creek – contain sulphur, iron, soda, magnesium, and the rare mineral lithium.”

For further information on Tassajara history, this book, and Marilyn McDonald, go to www.cuke.com/tass-marilyn – the page provides links to purchase the book.