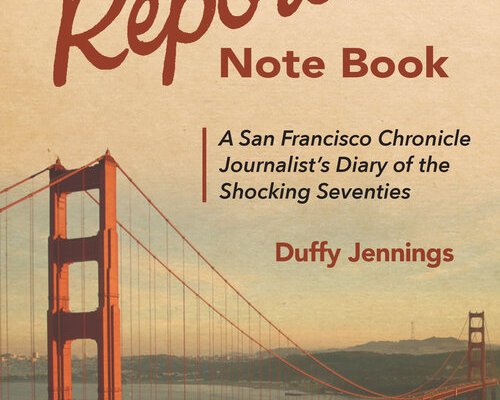 Your next recommended read is Duffy Jennings’ Reporter’s Note Book, A San Francisco Chronicle Journalist’s Diary of the Shocking Seventies. 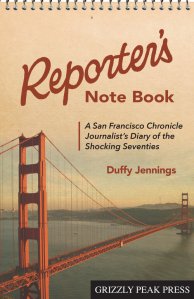 “The decade from late 1968 to the end of 1978 was as lawless as any in modern Northern California history,” Duffy writes in “Reporter’s prologue and then he lists the many events over the decade from the beginning of the Zodiac killings to the assassination attempts on President Gerald Ford. “Despite all these violent years, nothing had quite prepared San Francisco, or us at the Chronicle, for what was to come in 1978.”

“Ten Days in November 1978” is the title of Chapter 1 with the re-election of Jerry Brown as California’s Governor, the frightening and disturbing power of Jim Jones in Jonestown, and the tragedy of Supervisor Dan White. Dispatched with Chronicle photographer Clem Albers, Duffy and Clem arrive at City Hall moments after a shooting on November 27, 1978. Duffy compares notes with the other reporters, and calls the Chronicle’s city desk to relay information. “Word is Moscone and a supervisor, maybe Harvey Milk, are both dead.” Duffy describes the announcement given by board president Dianne Feinstein that Dan White murdered Supervisor Harvey Milk and Mayor George Moscone, “A collective gasp goes up, an outburst of audible disbelief and horror I’ve never heard from veteran news people, hardened as they are to executions, war, riots, plane crashes. All around us, city workers shudder in disbelief, some sobbing.”

Similar to the two books I’ve posted on this blog today, “Reporter’s Note Book” is both a memoir and a history of San Francisco. “Reporter’s Note Book” shares Duffy’s experiences as a reporter, his ability to call in a story, writing it as he speaks over the phone is impressive, and later he’s hired as publicity director for the San Francisco Giants. Duffy’s full life has been a community of professional friendships. “At the Perlman sendoff in 2017, Senator Feinstein was then 84 and I had just turned 70. We connected immediately from across the room as though 40 years had whisked by in a flash. She motioned me over, gave me a big hug and kiss and said, “Duffy, it’s so good to see you. But it also makes me sad to see you. Seeing you always makes me think of that day, that announcement.”

You can buy Reporter’s Note Book at Grizzly Peak Press.